Here is an example that walks you through the process of evaluating a source online.

In 2019, the status of koala extinction was discussed on social media following a spread of wildfires in Australia, with hundreds of individuals tweeting about this topic. 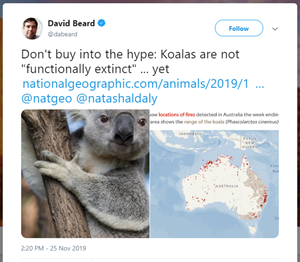 First of all, we should start by checking our emotions. Why is this contentious? Because koalas are cute and they may be functionally extinct and that’s sad. It might feel like David is claiming we shouldn’t care about koalas. After all, he is asserting that we shouldn’t “buy into the hype.” Is this the case, though? There is a lot here that we should stop and think about before jumping to conclusions.

First, let’s investigate who shared this information. Who is David Beard? David Beard’s bio on Twitter tells us that he used to work for the Washington Post and the Associated Press. After consulting the Washington Post’s website, we can see that this is true. So David works with news organizations, but he may or may not be a koala expert. Kathy is also not a koala expert, and instead she is a journalist and professor focusing on user experience. From their backgrounds, it seems that the individuals here are both fairly credible sources, but they aren’t the authors of these articles, just the people who shared them.

Next, what about their sources? David shared a link to a National Geographic article. According to Wikipedia, National Geographic is a magazine that shares “articles about science, geography, history, and world culture.” The article in question, “No, koalas are not functionally extinct – yet” cites scholars in wildlife conservation and environmental change biology at the University of Queensland Australia and the University of Tasmania, experts who are likely closely examining this issue as it evolves. It also cites studies about the koala population from 2012 and 2016.

To argue that koalas are becoming functionally extinct, Kathy shared a link to an article from Newsround. According to Wikipedia, Newsround is “one of the world’s first television news magazines aimed specifically at children.” This does not mean that Newsround is a low quality resource, only that it might be simplifying the news to better explain it to children. We can see this within the article proper. The article states that koala numbers are in decline and may be headed toward functional extinction. In fact, despite the way Kathy presented the article in her tweet, her article appears to actually support David’s point.

From this overview, we can see that National Geographic has a greater breadth of information about the koalas than Newsround, which included no citations to back up its claims. We could dig into the sources cited by National Geographic to learn more about the topic (and you should examine the resources being cited to make sure they are represented fairly), but it’s safe to say that National Geographic has provided a good base of scholarship to support its claims. Further, it is not asserting that koalas are not in danger. It concludes with: “If we want koalas, we’ve got to look after them. We need to step up.”