“For, if at any time there can be an excuse for the rashness of a Woman, who ventures to aspire to the sublimities of a science, which knows no bounds, not even those of infinity itself, it certainly should be at this glorious period, in which a Woman reigns, and reigns with universal applause and admiration.”

So Maria Gaetana Agnesi writes in the dedication of her major work Instituzioni analitiche (Analytical Institutions) to Empress Maria Teresa of Austria, as translated by John Colson in 1801. It was typical for an author to dedicate a book to a monarch, hoping to win favor and patronage, but here Agnesi (although with the usual flattery and praise) also speaks as woman to woman in a world dominated by men.

Agnesi (1718–1799) is considered the first woman mathematician, born in Milan, Italy to a wealthy merchant. She was a highly intelligent child, who spoke fluent French by the age of 5, knew Latin by age 9, and by 11 added Greek and Hebrew to her classical language repertoire as well as several modern languages. Her father provided her and her younger sister with tutors, and he liked to show her off at gatherings in his home with scholars and celebrities. She presented theses on a number of subjects and then defended them in academic disputations with the scholars present. These discussions were held in a variety of languages, and she answered in the language in which she was addressed.

In 1738, she published Propositiones philosophicae, a compilation of her defense of 190 theses that she gave at a gathering as a kind of capstone to her studies. Following this publication, she announced that she wished to join a convent. At her father’s objection, she reconsidered, but insisted on living a simple life devoted to study and contemplation and free from social obligations. At this time she turned her attention to studying mathematics, and after ten years, she published Instituzioni analitiche ad uso della gioventù italiana (1748), or Analytical Institutions for the Use of Italian Youth.

This volume, written in Italian rather than Latin, and presented as a handbook for educating young people in mathematics, was noted for its clarity and comprehensiveness. She treated not only algebra and geometry, but also the newer fields of integral and differential calculus.

She received much acclaim for the book. Maria Theresa of Austria, to whom she dedicated the book, sent Agnesi a diamond ring and letter. Pope Benedict XIV also sent a letter along with a gold medal and gold-and-gemstone wreath. He also appointed her to the chair of mathematics and natural philosophy at the University of Bologna, which she accepted as a purely honorary position. In spite of all this, Agnesi continued to withdraw from society and mathematical work and worked more and more for the church and the poor. Later in life, she became the director of a poorhouse, and held that position until her death.

It is often noted that her fame is not due to any major mathematical discoveries of her own, but is based on her reputation for brilliance, which convinced some men of the time that women had the capacity to understand complex scientific and mathematical concepts. In fact, in John Colson’s “Introduction” to his English translation, he challenges English women to take up the study of mathematics in order not to be outdone by Italian women: “[Women] seem only to want to be properly introduced into these studies, to be convinced of their usefulness and agreeableness, and to prevail on themselves to use the necessary application and perseverance. They have here a noble instance before them, of what the sex is capable to perform, when their faculties are exerted the right way. And they may be fully persuaded, that what one lady is able to write, other ladies are able to imitate, or, at least, to read and understand.”

The ISU library copy of Instituzioni analitiche includes the bookplate and signature of Henry Bickersteth in each of the two volumes. It is bound in simple vellum with spine labels. Henry Bickersteth (1783–1851) was an English lawyer who, in 1836, became a member of the Privy Council and was created Baron Langdale, of Langdale in the County of Westmoreland. 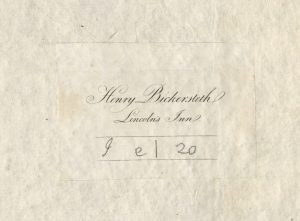 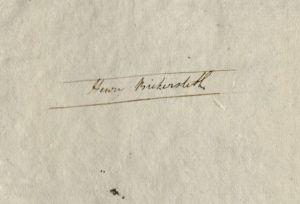 The bookplate indicates that Bickersteth likely acquired this book before he was given a peerage. The bookplate is simple, with no coat-of-arms, and simply the name followed by “Lincoln’s Inn.” This is, to me, a bit of a puzzle. Lincoln’s Inn is one of the four Inns of Court in London, the professional organizations for barristers in England. The puzzling part to me is that in 1808 Bickersteth was admitted to the Inner Temple, another of the Inns of Court, as a student. Why would he be a student at one, and have his residence at another? But there is more evidence that he did, in fact, live at Lincoln’s Inn. The Memoirs of the Right Honourable Henry Lord Langdale by Sir Thomas Duffus Hardy (1852) include a letter from Henry Bickersteth to his brother dated “Lincoln’s Inn, May 31st, 1827.”