From out of 18th Century England, at the crossroads of the Enlightenment and the Romantic Era, comes a curious work that weds poetry and science in flowery rhyming couplets, heavy with metaphor, and laden with scholarly footnotes. The work is The Botanic Garden (1791), a poem in two parts by Erasmus Darwin, grandfather to the more famous Charles Darwin.

Erasmus Darwin (1731–1802) was a physician by trade and a natural philosopher and poet by avocation. He was taken with the recent work of Carl Linneaus (1707–1778) on plant taxonomy, which divided plants into classes and orders based on the number of male and female sexual organs in the flowers, and determined to work this system into poetry in “The Loves of the Plants,” Part II of The Botanic Garden. 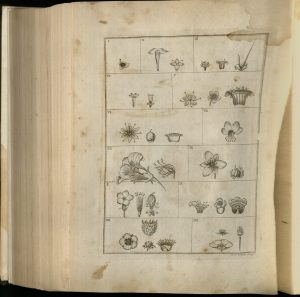 Engravings illustrating the classes of plants as determined by numbers of stamens. 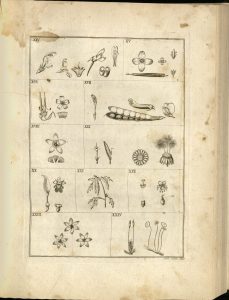 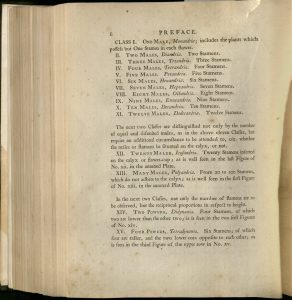 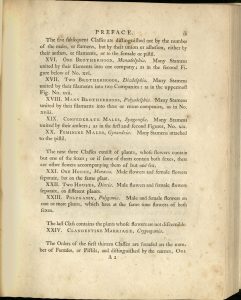 While many Englishmen of the time were scandalized by the sexual nature of Linneaus’ taxonomic system, Darwin embraced it, using suggestive images in his floral descriptions, writing of blushing virgins, handsome swains, and deceitful harlots. Take, for example, his description of the genus Gloriosa, which he describes in a footnote as having “Six males, one female. The petals of this beautiful flower with three of the stamens, which are first mature, stand up in apparent disorder; and the pistil bends at nearly a right angle to insert its stigma amongst them. In a few days, as these decline, the other three stamens bend over, and approach the pistil.”

When the young Hours amid her tangled hair

Wove the fresh rose-bud, and the lily fair,

The blushing captives of her virgin chains.—

—When Time’s rude hand a bark of wrinkles spread

Round her weak limbs, and silver’d o’er her head,

The flatter’d victims of her wily age.

“The Economy of Vegetation,” part I of The Botanic Garden, is vast in scope, describing both natural phenomenon and the progress of civilization. In the verses below, despite their references to God, the description of the creation of the universe is more reminiscent of the Big Bang theory than Genesis:

_LET THERE BE LIGHT!” proclaim’d the ALMIGHTY LORD,

Through all his realms the kindling Ether runs,

And the mass starts into a million suns;

Earths round each sun with quick explosions burst,

And second planets issue from the first;

Bend, as they journey with projectile force,

In bright ellipses their reluctant course;

And form, self-balanced, one revolving Whole.

_Onward they move amid their bright abode,

Space without bound, THE BOSOM OF THEIR GOD!

Darwin describes new inventions, like the steam engine, in heroic terms and envisions its many future uses, in boats, cars, and even flying machines:

And call’d delighted SAVERY to your aid;

In gathering clouds, and wing’d the wave with fire;

And sunk the immense of vapour to a drop.—

Press’d by the ponderous air the Piston falls

Wields his large limbs, and nodding shakes the earth.

Drag the slow barge, or drive the rapid car;

Or on wide-waving wings expanded bear

The flying-chariot through the fields of air.

I was surprised to discover that “The Economy of Vegetation” was illustrated in part with engravings by none other than William Blake, known for his own illuminated books of poetry. His engraving, “Tornado” accompanies this verse:

You seize TORNADO by his locks of mist,

Wide o’er the West when borne on headlong gales,

Howls high in air, and shakes his curled brow,

Lashing with serpent-train the waves below,

And showers a deluge from his demon-wings.

Although Darwin’s high style of poetry may be agonizing to many modern readers, The Botanic Garden was popular when it was first published. Its vision of scientific and cultural progress was vibrant and appealing. Associated as it was with the scientific progress and sexual freedom of the French Revolution, however, popular opinion turned against it as the Revolution turned more savage. Only seven years after its initial publication, it was satirized by George Canning in The Anti-Jacobin in the poem The Loves of the Triangles. In later years the Romantic poet Samuel Taylor Coleridge is famously said to have despised Darwin’s poetry.