The nervous system allows us to detect changes in the environment and react to them. An external stimulus is detected by a receptor, which sends sensory information to the central nervous system, where it is processed. If a motor response is initiated, it usually involves a series of action potentials which produce muscle contraction and movement in one or more parts of the body. A reflex is the most simple stimulus-response reaction. A loud sound or something flying at your eye makes you blink, while a tap on the tendon under the knee cap produces the knee-jerk (or myotactic) reflex.

A simple reflex like the myotactic reflex is produced via single synapses between sensory axons and motor neurons. The required circuitry for this reflex is confined to the spinal cord, as shown in Figure 1. Sensory information also ascends to higher centers, but the brain is not necessary or required to perform the reflex. More complex reflexes usually involve additional (inter-) neurons and more than one population of motor neurons. Thus, more neurons and synapses are involved, which usually results in a longer delay between stimulus and response and often a more complex response. One example of such a complex response is the flexion withdrawal reflex, where a noxious stimulus to one leg causes withdrawal of the stimulated leg and extension of the other.

Now that we understand neural transmission and synapses involved in basic reflexes, we can begin to ask how nerve cells are assembled into more complex structures like pools, circuits, and pathways. Stimulus on the nervous system exerts its effects on special cells called receptors. These cells are modified to respond to “outside information” rather than to synaptic inputs from other nerve cells. Outside information can take the form of light entering our eyes; of mechanical deformation to cells in the cochlea or vestibule due to sound or pressure waves; or of chemicals, as in our sense of smell or taste. In all these cases, the effect of the stimulus is to produce an electrical signal in the receptors and consequently a modification in the rate of neurotransmitter release at their terminals.

The visual and auditory systems work separately and in combination with each other to inform and guide the body’s internal and external actions. Sometimes responses to light or sound are simple and are considered reflexes. Other pathways contain more neurons and require more processing in the higher brain centers.

The visual system distinguishes variations in shape, color, brightness, movement, helping to distinguish familiar people, places and things from unfamiliar, to determine relative location, and detect visual input important to daily function and general survival. Visual reflexes adjust instantaneously from static and dynamic visual input that is near or far, blocking out extraneous visual input when visual concentration and focus are required, while remaining vigilant to unusual visual input important to productive functioning and general safety. While the visual and auditory sensory systems each provide the body access to unique forms of stimulus input, they also work together to coordinate “seeing-hearing” information and with each of the other sensory systems to inform and prioritize input for the central nervous system to guide and direct action in response to ever-changing conditions. Due to a number of issues the auditory and visual systems can become hypersensitive or hyposensitive or simply not function.

Perception of incoming light begins when the photons are detected by the retina’s photoreceptors (rods and cones). In the most-simple pathway, photoreceptors synapse with bipolar cells, which then synapse with the retinal ganglion cells that exit the back of the eye as the optic nerve (cranial nerve II).

The two optic nerves exit each eye at the optic disk and combine at the base of the brain just in front of the brainstem to form the optic chiasm (Figure 2). In the optic chiasm, half of the axons from each eye cross over, or decussate, to the other side of the brain.  Note in the figure below that input from the left visual field strikes the nasal retina (side closest to the nose) of the left eye and the temporal retina (side closest to the side of the head) of the right eye. Likewise, input from the right visual field strikes the nasal retina of the right eye and the temporal retina of the left eye. Therefore, both eyes receive information from both visual fields.

In the optic chiasm, axons originating from nasal ganglion cells cross to the opposite side, whereas axons originating from temporal ganglion cells stay on the side of origin. The result is that after the optic chiasm, all input from the right visual field travels in axons in the left side of the brain, and all input from the left visual field travels in axons in the right side of the brain.

To simplify the visual pathway, we note that photoreceptors synapse with 1) bipolar cells in the retina. Retinal bipolar cells synapse with 2.) retinal ganglion cells. From here, the axons of ganglion cells may decussate at the optic chiasma or remain on the ipsilateral side and synapse with 3.) neurons of the lateral geniculate body of the thalamus, which form optic radiations. 4.) The optic radiations synapse on the primary visual cortex (V1) in the occipital lobe of the brain, which is physically very far from the photoreceptors of the retina. You can approximate this distance by measuring from your eyes to the occipital region of the skull.  For conscious awareness of visual information, additional processing must take place in the brain cortex, including several visual processing areas (V1-V6), which add many other synapses to this pathway.

The afferent neurons of the auditory nerve terminate in the cochlear nuclei in the brainstem. From here, the auditory pathway can be complex. The simplified figure (below), shows secondary neurons passing through the auditory reflex centers of the inferior colliculi and synapsing with third-order neurons that travel to a nucleus of the thalamus called the medial geniculate body. In the medial geniculate body, the third-order neurons form synapses with quaternary neurons that transmit information to the auditory cortex in the temporal lobe, resulting in the conscious recognition of sound.

To simplify the auditory pathway: 1.) hair cell receptors synapse with a cochlear branch of the vestibulocochlear nerve.  2.) These fibers then terminate in the cochlear nucleus and synapse with secondary neurons that ascend to the inferior colliculus. 3.) Tertiary neurons extend to the thalamus and synapse with 4.) quaternary neurons that project into the auditory cortex. Note that the overall path length of the auditory pathway is relatively short because the inner ear is proximal to the temporal lobe of the brain, and relatively little additional cortical processing is required for the conscious recognition of auditory stimulus (short pathway, few synapses).

In this laboratory, we will examine the reaction times for auditory and visual responses to stimulus. The reaction time is simply the time required for processing between a visual or auditory stimulus and a response. We can compare this information to our anatomy knowledge of the number of synapses in a pathway, and the path length, to determine what type of information is processed faster by the human body. Reaction time measurements will be taken from an individual subjected to harmless visual and sound stimuli. In addition, the effect of priming and prediction may be examined.

Aim: To measure the reaction time of a subject to a VISUAL CUE. 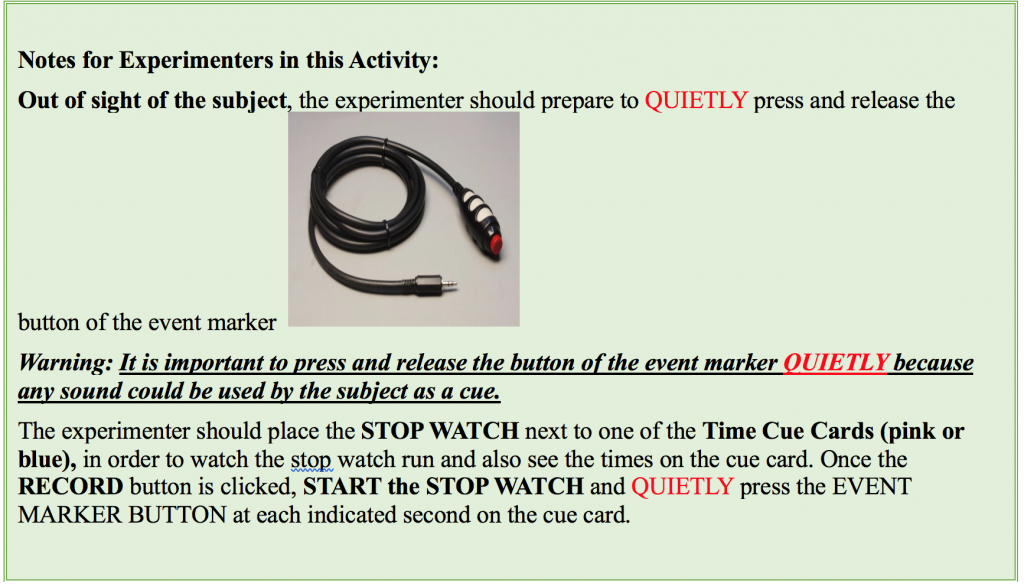 Aim: To measure the reaction time of a subject to an AUDITORY CUE. 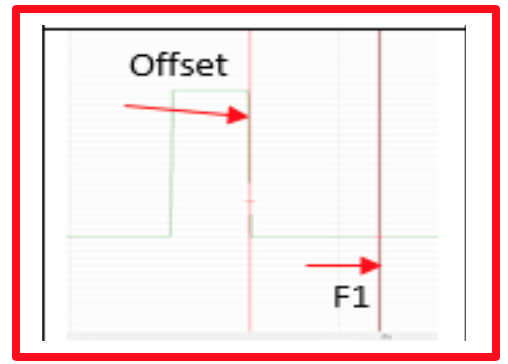 Aim: To measure the reaction time of a subject to an auditory cue delivered immediately AFTER a verbal prompt.

Repeat Exercise 2 with THIS additional step. Before each auditory cue is delivered, tell the subject to GET READY to respond to the cue. It is best to use a one or two word cue directly before clicking the event marker button.

Aim: To measure the reaction time of a subject to auditory cues delivered at a predictable interval.

Repeat Exercise 2 with a predictable interval of FIVE SECONDS between each auditory cue. Use the WHITE time card and the timer.

A Mixed Course-Based Research Approach to Human Physiology by Karri Haen Whitmer is licensed under a Creative Commons Attribution-ShareAlike 4.0 International License, except where otherwise noted.