The movement of parts of the body is accomplished through a system of levers composed of skeletal muscles and bones. In a lever, the muscle attached to the bone provides the effort or force that moves the bone. As the muscle contracts and relaxes, flexes or extends, the bone rotates around a joint in the skeletal system. In relation to the muscles, the bones, and the body part being moved, the joint is the fixed point that functions as the fulcrum (point of rotation) for the lever. The body part being moved is the load on the lever. All levers, including the ones in the body, can be categorized into one of three classes, which are based on the position of the fulcrum in relation to the positions of the effort and the load (Figure 1).

Muscles are classified into functional groups depending upon how they contribute to joint movement. Agonist muscles are also referred to as “prime movers.” The agonist provides the most force to complete the movement at a joint. Antagonist muscles are those whose action opposes the movement of the agonist. That is, typically when the agonist muscle contracts, the antagonist muscle must relax to allow movement. For example, during elbow flexion, the biceps are the agonist and the triceps are the antagonist. Antagonistic muscle activity can be seen as waxing and waning EMG trends when recording the biceps and triceps while flexing or extending the arm. Muscles classified as synergists stabilize a joint when it is moving. During elbow flexion, synergist muscles include the brachioradialis and brachialis: these assist the biceps and stabilize the elbow joint.

At this point in the course, we have created and analyzed several electromyograms (EMGs). This week, EMGs will record the electrical impulses from muscles during sustained voluntary muscle contraction during an arm wrestling match to help us understand how arm movement works. Unlike the smooth, wave-like EMGs seen for stretch reflexes and direct nerve stimulation, EMGs recorded during most voluntary muscle contractions are visualized as bursts of spike-like signals where the duration of the burst is proportional to the duration of the muscle activation. During voluntary muscle contraction, like we see in arm wrestling, hundreds or thousands of motor units fire at the same time. Additionally, the frequency of muscle fiber firing is greater in voluntary movement than in reflexes. Because of this, it becomes very difficult to quantify the amount of electrical activity in a muscle unless the raw EMG data is mathematically transformed. Most commonly, raw EMG data is transformed using the integration of the absolute values of the amplitudes of all the individual EMG spikes. This is called the absolute integral. The area under the curve of the absolute integral of the EMG is linearly proportional to the strength of the voluntary muscle contraction.

The number of skeletal muscle fibers in a given muscle is genetically determined and does not change. Muscle strength is directly related to the amount of myofibrils and sarcomeres within each fiber. Factors, such as hormones and stress (and artificial anabolic steroids), acting on the muscle can increase the production of sarcomeres and myofibrils within the muscle fibers, a change called hypertrophy, which results in the increased mass and bulk in a skeletal muscle. [1]

As the arm wrestling contestants begin the competition, muscle action potentials are generated to keep their muscles active and move their forearms to pin the opponent to the table. The muscles that are more active on an EMG will depend on whether the contestant is winning, gaining the advantage by pushing their opponent’s arm to the table, or losing, being at a disadvantage when their own arm pushed toward the table.

Mechanics of an Arm Wrestling Match

Arm wrestling involves the primary use of four muscles: the Biceps brachii, Pronator teres, Pectoralis major and Flexor carpi ulnaris. Other muscles such as the deltoid, Latissimus dorsii and Triceps brachii are also used. The forearm muscles are generally thought to be the most important with the upper arm and chest providing additional strength.

There are two factors involved in winning an arm wrestling match: muscle fitness and arm wrestling technique. In this lab, we will explore EMG responses to arm wrestling for two muscles: the pronator teres and the biceps brachii muscle.  Using the EMG data, you may be able to differentiate whether technique or muscle mass was more important for the outcome of your matches.

Movements During a Match: Pronation and Supination 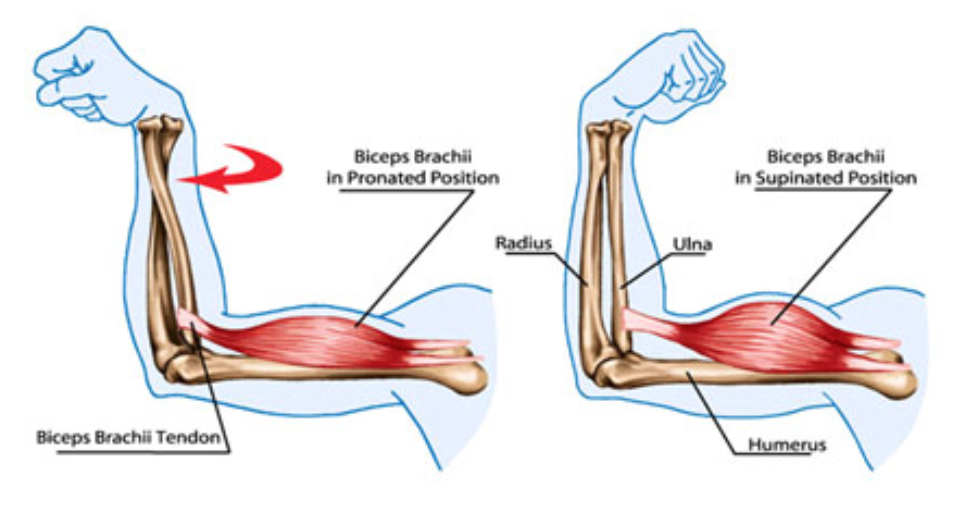 Movements During a Match: Elbow Flexion

Keeping the arm close to the body and the flexion of the elbow tight during arm wrestling is a commonly taught technique for helping to win a match. This is partially because the power of the biceps brachii muscle can be more easily harnessed to force the opponent’s arm down onto the table in this position. Once the opponent’s biceps are extended, they have to work much harder to win the match.  In the case of elbow flexion, both the pronator teres and the biceps brachii will act as elbow flexors under resistance; that is, they act synergystically to keep the elbow bent.

In general, proper arm wrestling technique involves keeping the arm at an acute angle and never allowing the arm to extend beyond 90 degrees. This posture allows the arm wrestler to more easily keep the arm close to the trunk and capitalizes on the strength of multiple muscles and ligaments. Once the opponent’s arm is extended beyond 90 degrees, it will be very difficult for them to push back into a neutral position. 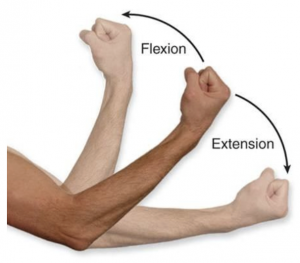 In this lab, you will compare the size of the upper and lower arm, EMGs and the angle of the humerus and radius/ulna to determine:

Students participate in arm wrestling to observe and measure EMG activity while winning and losing. Electrodes will be placed on the Biceps brachii (upper arm) and Pronator teres (forearm) muscles to observe muscle action as different forces are used to pin the opponent to the table. Detailed instructions of electrode placement are found in the Set-Up portion of this week’s lab.

3.) Remove the plastic disk from a disposable electrode and apply it to one of the scrubbed areas. Attach an electrode to each of the other areas.

4.) Snap the recording lead wires onto the electrodes, so that:

Aim: To study the EMG activity in muscles that work while simulating winning or losing during arm wrestling.

Note: Only one of the participants will have the electrodes attached to his/her arm at a time. Each student must participate as subject in Exercises 1 and 2. You may share data from the “between table” activity (Exercise 3).

5. Use the mouse to click and drag the double cursors to the onset and offset of the WINNING EMG burst (including both the pronator and biceps EMGs) during the first “winning” cycle (Methods figure 3).

6. Record T2-T1 and the Abs Int values for each muscle on your data table.

7. Use the mouse to move the cursors to onset and offset of the LOSING EMG burst (while the subject was “losing” at arm wrestling). Record the values for Abs. Int and T2-T1 from both muscles while “losing”.

Aim: To study the EMG activity in muscles that work while winning or losing during an arm wrestling match.

Only one of the participants will have the electrodes attached to his/her arm at a time.

What are the rules for Arm Wrestling?

Note: at the end of the match, ask opponents to hold their relative winning/losing positions in order to measure the arm angle with the goniometer.

To start: record the circumference of the upper arm (biceps) and forearm (pronator) for each opponent by using a tape measure and wrapping it around the broadest area of the arm.

Note: The person operating the computer needs to know when the subject’s arm moves from a winning position to a losing position and back again. One student should act as the “spotter” and call out “Winning or Losing.”  The computer operator can simply type in W or L to indicate. This can occur relatively quickly, and some matches can be over in less than a minute.

Now a winning arm wrestler from each table will wrestle another table.  Due to equipment upkeep concerns, for this exercise, only one of the arm wrestlers from the two tables needs to be connected to electrodes. The two tables should share the data for the wrestler whose data is recorded.

To start: record the circumference of the upper arm and forearm for each opponent by using a tape measure and wrapping it around the broadest area of the arm.  When the match is over, be sure each opponent holds his/her winning or losing arm position to record the angle of the arms.

Use the same instructions from Exercise 2.

During the match, spotters should tell the computer operator whether the recorded opponent is Winning or Losing so it can be marked on the data.

A Mixed Course-Based Research Approach to Human Physiology by Karri Haen Whitmer is licensed under a Creative Commons Attribution-ShareAlike 4.0 International License, except where otherwise noted.